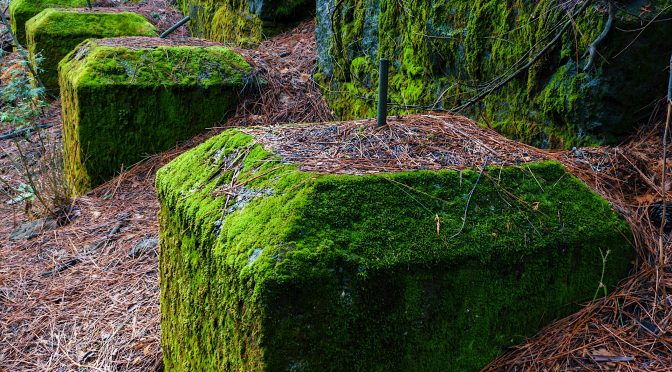 Artifacts of Change Along the Historic Southern Pacific Route

Between 1886 and 1887, the Central Pacific Railroad (a predecessor to Southern Pacific) extended its reach from Dunsmuir to Sisson (now Mount Shasta) and then to Igerna (now south Weed). Best as I can tell of this writing, the Southern Pacific, by World War II, made a number of grade and alignment improvements, most likely to accommodate longer trains, increased traffic, and more modern diesel locomotives.

Below are some of the relics left behind by these changes, which can be easily explored and photographed.

This abandoned ROW (right-of-way) was the original Southern Pacific alignment between Mott (north of Dunsmuir) and Azalea (south of Mount Shasta). Modernization and construction of a siding for trains staging into and out of Cantara Loop necessitated moving this portion of the line about 50 to 100 yards east. I believe the northern end required another trestle, but I couldn’t find any evidence of one, and I haven’t been able to find any information regarding one.

The easiest way to visit these remains is to get off at the Mott Road exit of Interstate 5 just north of Dunsmuir, or just south of Mount Shasta. Head west to the t-intersection. Turn right, heading north on Mott Road. Once you cross the Union Pacific tracks, the road becomes Old Stage Road.  After about a half mile, the pavement ends, and the road descends into the Big Canyon Creek drainage. Be careful, as Old Stage Road is a one lane road until it meets up with Cantara Loop Road.

The trestle footings in the photo below are found on the right (east) side of the road as you descend into the drainage.  The trestle was rendered obsolete when the new alignment used a cut-and-fill design along with a culvert to span Big Canyon Creek.

After climbing out of Big Canyon Creek drainage you pass a house on your right. Shortly after doing so, the road enters a US Forest parcel. About 100 yards or so after passing the aforementioned house, look to the right to find the wall feature in the next photo. You can park and walk up to the abandoned railbed. A quarter mile length of railbed can be walked from here, and is all on US Forest Service land. Head north until it ends at the next water drainage.

This small retaining wall can be found on the east side of the Union Pacific right-of-way, between the two crossings of Nixon Road. I believe it was built to protect a long gone railroad signal, c. 1905Nearby USGS benchmark 3596 B can be found. It is one of the older benchmarks still existing in the area, monumented in 1902.

As of this writing, I have not walked this old alignment. But I have had a chance to photograph old trestle abutments at the south end of the alignment. The realignment must have occurred before 1935; as the newer alignment is reflected in the 1935 USGS Dunsmuir quadrangle topo map (On a side note, the 1935 map shows a spur running along the south of Deetz Road, as well as the existence of a landing field and aircraft beacon. There are are no remnants of these features remaining).