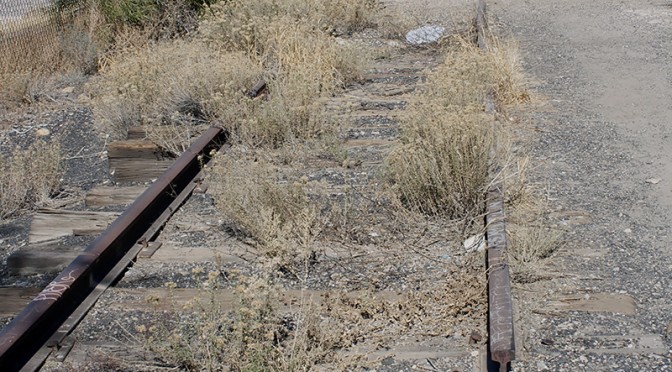 This railroad by established by the Phelps Dodge Mining Company, which opened this Tucson to Mescal segment on November 20, 1912. From the South Line Junction east to Mescal, the track mostly paralleled the existing Southern Pacific Line. At Mescal, it headed south to Fairbank. Southern Pacific eventually purchased the EPSW and took control on November 1, 1924.

November 16, 1924: The EPSW passenger station in Tucson closes in favor of the SP station on East Congress.

December 6, 1925: A link between the two lines opens from the 36th Street Junction (now the east end of the Tucson yard) to the South Line (now near Alvernon and Interstate 10). From this point, this segment from the South Yard Junction to South Line Junction was used for car storage until it was abandoned on January 25, 1942.

The City of Tucson acquired at least part of the right-of-way on July 16, 1999, from the Union Pacific Railroad Company. The city, along with Pima County, is developing part of the ROW as a greenway; parts of that effort have been completed south of Cushing Street. Where possible, the goal is preserve the existing rail within the context of the greenway. Unfortunately, due to a lack of proper oversight, some of the rail has been pulled by ongoing development. For example, the rail pictured in the gallery at St Mary’s Road was pulled up during an improvement project in late 2013, along with removal of the crossing control box and other crossing artifacts.

The map below traces the abandoned segment. Black indicates still discernible traces of the route; red indicates the inferred routing. Photos of the ROW can be viewed by clicking on the markers, as well as in the gallery following the map.

This jQuery slider was created with the free EasyRotator for WordPress plugin from DWUser.com.